Industrial chic: a new lifestyle hotel in the heart of the metropolis. The vibe in the public areas invites everyone to party, while the guestrooms are all about detox and deceleration.

Art with local roots: street-style graffiti from Herakut, the internationally celebrated artist duo hailing from Frankfurt, leads guests into the lobby. Exposed ceiling pipes and bare concrete walls create a laid-back atmosphere for socialising, networking, checking emails and even small meetings in the enclosed cubic seating area. Everything else is open-plan. Check-in is at the bar – along with breakfast, a coffee break or evening cocktails. Different lobby zones mean there’s a space for everyone. To see and be seen, stay close to the bar and be part of the action. For some peace, settle into a niche along the outer edge. Smart soundproofing is as important to the design as connectivity.

Local touches: “bull and bear” symbols offer a nod to the stock exchange, while newspaper references allude to the building’s past as the former headquarters of the Frankfurter Rundschau.

What was the overall premise of the project? 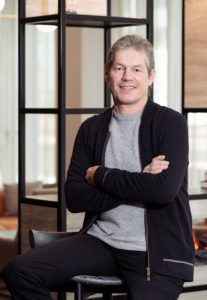 It was essential the project related to its central location in downtown Frankfurt. The general idea was to weave associations with the city into the concept, following the motto “bring Frankfurt to Moxy”. This also included the integration of bull and bear motifs as symbols of the nearby stock exchange.

We especially liked how the associations with the city of Frankfurt were incorporated into the design. Rather than bold gestures, JOI-Design developed refined, subtle elements that visitors might only notice upon second glance.